It is not easy to trace the origins of knowledge in a question of science. So far history of otology has mainly concentrated on auditory sciences. The history of the evolution of vestibular sciences is complex and fascinating and it paralleled evolution of art and science as civilisation unfolded. The very idea that balance can be affected by a tiny organ in the ear seemed unbelievable at first and indeed pathfinders way ahead of their times were not believed and some of their ideas considered preposterous. The following article traces the history of knowledge regarding vestibular anatomy and physiology form the earliest times until the early years of the 20th century.

The ancient and the classical world was a golden age of human enlightenment and the quest to explore nature began. The earliest mention of ‘giddiness’ as a malady described in the Ebers papyrus recovered from the Theban necropolis was written in circa 1500 BC but ascribed to at least 3000 BC. Erasistratus of Chios (304-250 BC) was the first to describe vestibular processing in the brain working in Alexandria and he had also been the court physician to the early Seleuccids in Antioch. 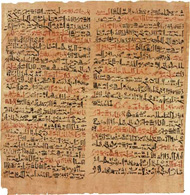 The Ebers Papyrus circa 3000 BC

Aristotle (4th century BC) described dizziness on alcohol intoxication as did Juvenal, the Roman poet in 55 AD. Lucretius (1st century BC) in his De Rerum Natura narrated consequences of body rotation whilst experimenting with a love potion. Ptolemy (1st and 2nd century AD) described symptoms of visual vertigo. Curiously Hippocrates (5th century BC), the father of modern medicine had described tinnitus and hearing loss but did not mention vertigo.

Archigenes in the 1st or 2nd century AD accurately described a syndrome consisting of vertigo preceded by tinnitus, headache, sensory heaviness and sensory weakness [including sensory disturbances such as hearing loss] that will echo much later as a definite entity called Meniere’s disease. His works did not survive but were quoted extensively by other physicians including Galen.

It was Claudius Galenus (129 – 200 AD) from the court of Marcus Aurelius who first named the inner ear passages as ‘labyrinthos’ after the Cretan myth. He correctly described vertigo as a spinning sensation distinct from a perception of lightheadedness and ascribed it to a visual condition scotoma. 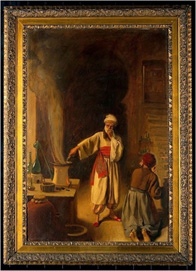 After the sack and fall of the Roman Empire, Europe plunged to the dark ages. Geopolitical, artistic, scientific and social norms were in a state of flux and human progress was mired in superstition, taboo and conflict. This affected medicine too. However, the Arabian world flourished with a blossoming of knowledge. And quietly and silently and at great personal risk of being branded as heretics, Italian monks in different monasteries started consolidating this data by translating Arabian texts in Latin and storing them. The medical school in Salerno spearheaded the movement in circa 11th and 12th century AD.

Gariopontus in the 11th century ascribed ‘darkening of eyes’ to vertigo and thought that it originated in the stomach. 3 influential Arabic physicians Avicenna, Rhazes and Constantine the African all had described classical spinning sensations and proposed possible causes either in the head or in the stomach. Arnaldus de Villanova described a revolution of the spirit in front of the eyes or an enveloping of the eyes where vision was impeded. It can be noted that Rhases actually quoted Archigenes and although vertigo was ascribed to the stomach, he described that vertigo might actually originate in the head. Avicenna described vertigo as coming from gases collected in the brain or in the stomach.

The 16th – 17th century and the Renaissance 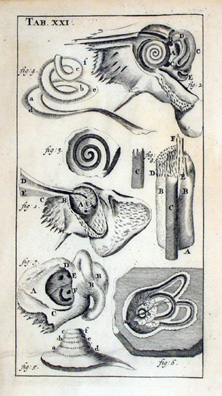 As one can see that from antiquity up to the middle ages, it was well recognised that there was a sensation involving an illusion of motion but there was no knowledge on how it happened or what caused it. The time was ripe for an explosion of knowledge in vestibular sciences from the Renaissance period. Parallel to the art forms expressing the age of enlightenment and glorifying the creator, the human quest to explain nature by science emerged and flourished. Along with this profound change blossomed the science of anatomy aided by an artistic movement that experimented with light and shade, with character and with subject matters .

Andreas Vesalius (1514-1564), Gabriel Fallopius (1523-1562), Bartolomeo Eustachius (1514-1574) and Giovanni Morgagni (1682-1771) described the semicircular canals in the human in the 16th and early 17th centuries – they were anatomists in addition to being gifted artists. The English physician and politician James Drake (1667-1707) drew different sections of the inner ear labyrinth based on Fallopius’ comprehensive rendition. These were the times when human cadaver dissection was gaining momentum and the microscope was already invented in a basic form. Most of these anatomists also worked with magnifying glasses. 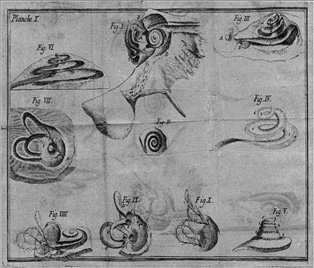 The inner ear by Guichard Duvarney 1695

The best known treatise on the human vestibular system after an initial description by Fallopius was the now almost forgotten Traite de l’Organe de l’Ouie published 1695, the first dedicated text book on otology in history and was a benchmark in inspiring future generations to embark on ground breaking research. This was written by Guichard Joseph Duverney (1648 – 1730), a French anatomist. He used a basic microscope and focussed candle light to draw an astonishingly detailed inner ear labyrinth that was accurate to the point of being replicated by the highest resolution CT scan of the modern era.

The association of vertigo as a neurological disorder was first proposed by the English physician Thomas Willis (1621-1675) who tried to explain vertigo in Galenic animal spirits causing motion in head through nerves.

The 18th and the 19th century can be ascribed as the golden age in the research in vestibular sciences. This mirrored the political revolution in Europe and the change in world order and the birth of the Romantic movement in art which glorified the human spirit.

This inspired the vestibular scientists to explain nature by discoveries and by innovations which they designed and experimented with. It was an age of scientific and spiritual discovery. These were the times of Napoleon, of Beethoven, of Goya and of Delacroix who by their contradictions and by their genius established a new world order.

And then as if by a stroke of magic vestibular physiology was born. Head on body rotation generating vertigo, slumber and laughter was identified by Erasmus Darwin (1731-1802, Lichfield) and Joseph Cox (1763-1818, Bristol) with the first experimental device in vestibular history. William Porterfield (1696 – 1771, Edinburgh) and William Wells (1757 – 1817, London) were the first to point out the role of vision and eye movements in response to rotation.

Marie Jean Pierre Flourens (1794-1867, Paris) regarded as the father of vestibular function in his revolutionary animal experiments of ‘extirpation and ablation’ showed for the first time that removal and stimulation of pigeon semicircular canals elicited nystagmus and disturbances in posture and equilibrium. Johannes Evangelist Purkinje (1787 – 1869, Breslau) used himself as the subject for rotation tests and recording of eye movements; he also identified the role of vestibulo cerebellar connections for posture. Prospere Meniere (1799 – 1862, Paris) attributed vertigo to a problem in the inner ear for the first time in history shattering the Galenic myth that it was ‘’cerebral apoplexy”. He was soundly rebuffed by the Imperial Academy of Medicine. Armand Trousseau (1801 – 1867, Paris) was a strong supporter of Meniere and being an influential member of the Academy pushed his case which gained momentum much later in the 20th century.

Friedrich Goltz (1834-1902, Halle) confirmed Flourens’ observations but believed that the canals have some role in hearing. Joseph Breuer (1842-1925, Vienna) identified endolymphatic flow directional currents for stimulation of the semicircular canals and the role of otolith organs as translational sensors . Ernst Ewald (1855 – 1921, Strasbourg) determined direction of endolymphatic flow on stimulation called ‘’Ewald’s laws’’. Ernest Mach (1838-1916, Prague) independently arrived at the same conclusion as Breuer and the fact that the vestibule has no role in hearing was called ‘’ Mach-Breuer hypothesis’’. Alexander Crum Brown (1838-1922, Edinburgh) explained with human experimentation the pairing of semicircular canals. Endre Hogyes (1847 – 1906, Budapest) identified the clinical effects in semicircular canal destruction and compensation and Albert Jansen (1859 – 1933, Berlin) identified nystagmus as a clinical sign for semicircular canal lesions.

The 20th century and modern times

The 20th century heralds the modern age. The development of the electron microscope and histochemical techniques paved the way for further delineation of vestibular anatomy. At the same time, ground breaking vestibular function research was spearheaded by one man who won the Nobel Prize in Medicine for his work. This tradition is continuing with technological advances at an accelerated pace to this day.

Santiago Ramón y Cajal (1852 – 1934) won the Nobel Prize in 1906 for describing systems in the brain that include the connections of the vestibular nerve to the vestibular nuclei. Gustav Alexander (1873 – 1932, Vienna) described Alexander’s law and Rafael Lorente de No (1902 – 1990, New York) described the vestibulo ocular reflex arc for the first time in 1933. However, the ultimate push for vestibular sciences occurred with one man who firmly established the discipline in a secure scientific footing and won recognition all over the world. He won the Nobel Prize for his pioneering work in vestibular physiology in 1914 and in his Nobel acceptance speech expressed gratitude to the pioneers preceding him and as highlighted above. 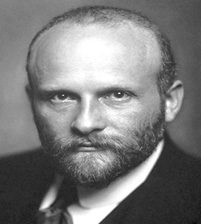 He was Robert Barany (1876-1936). Great philosophers and thinkers are always curious and seek explanation of natural phenomenon however trivial they might appear. This is what he described in his Nobel acceptance lecture on 11the September, 1916 – ‘’One of my patients, whose ears I was syringing, said to me: “Doctor, I only get giddy when the water is not warm enough. When I do my own ears at home and use warm enough water I never get giddy.” I then called the nurse and asked her to get me warmer water for the syringe. She maintained that it was already warm enough. I replied that if the patient found it too cold we should conform to his wish. The next time she brought me very hot water in the bowl. When I syringed the patient’s ear he shouted: “But Doctor, this water is much too hot and now I am giddy again.” I quickly observed his eyes and noticed that the nystagmus was in an exactly opposite direction from the previous one when cold water had been used. It came to me then in a flash that obviously the temperature of the water was responsible for the nystagmus. From this I immediately drew certain conclusions. If the temperature of the water was really responsible, then water at exactly body temperature should cause neither nystagmus nor vertigo. An experiment confirmed this conclusion.’’

His work included caloric testing and the Barany rotatory chair in addition to vestibular physiology which by any standards was ahead of his times and paved the way for future research.

The legacy continues and now in the 21st century we can accurately measure the different vestibular organs, new vestibular pathologies have been identified , central vestibular connections are visualised with the latest state of the art imaging techniques and effective treatment of vestibular conditions have been refined.

We are living in the most exciting times of vestibular science discoveries. Vestibular knowledge is still evolving and the promenade continues. We must never forget how we have arrived here. It is due to the great thinkers and scientists who had enriched our knowledge. The history of the evolution of vestibular sciences is every bit as fascinating and complex as the science itself.